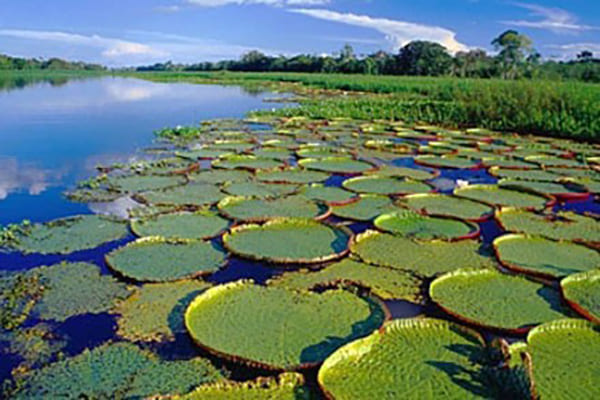 Peru's mega bio-diversity is worldwide recognized, due to its heterogenic geography, more than 60% of its territory is Amazon. Here the wildlife is exuberant, and without been exaggerating we can say that is a real natural paradise where the biggest quantity of the planet species are concentrated, such as mammals, insects, birds, plants and other ways of life, many of them has not been studied yet and others not even discovered.

Nevertheless, the danger and the threat that this natural world confronts, are a latent reality, and if human beings do not change their attitudes in relation to the correct use of the natural resources, probably the human being will never ever will have the opportunity to find out the existence of many species. In such a way these species will be disappearing for ever before even being known. If this seems to be not enough, do not forget that at least 25% of all well-known and used drugs in the world, are fruits of found chemical mechanisms in the greatest pharmacy of the world: "the Amazonian Forest", nowadays we only know 5% of what in there exists.

The competition is intense and responsible for thousands of different chemicals found in tropical forest plants. Around 25% of all drugs found in a modern pharmacy, in fact, are derived or copied from those found in the rainforest. The reason of this is quite simple.

Unlike animals, plants are unable to run away from predators. Instead over millions of years they have evolved a bewildering variety of what are called "secondary compounds" chemicals that have nothing to do with the plant physiology but rather have evolved solely for defensive purposes.

A single hectare (2.5 acres) of rainforest can hold up to nearly 300 different species of trees (a typical temperate forest may have 20) in reality the jungle represents the largest, most highly-sophisticated repository of biologically - active chemicals in the world.

On Manu's floodplain the vegetation is therefore especially rich; in fact visitors will see some of the Amazon's only remaining natural stands of tropical cedar (Cedrela odorata) as well as scattered mahogany trees (Swietenia macrophylla). Both are economically important hardwoods that have been logged nearly to extinction.

Tree specie made part of the Manu history is the local Rubber Tree (Hevea brasiliensis) which was regularly and continual cut to supply of latex or rubber gum.

The crocodilians have been around for nearly 200 millions years, there are 21 species of them. Crocodile hearts are almost as advanced as those of birds and mammals. In fact their closest living relatives are the warm-blooded birds. Many crocodilians even gather brush to build nests, as birds do.

The caimans (crocodilian) is ideally adapted to its life as predator. When it is submerged in the water, very little of its body is exposed, apart from its eyes. They are positioned close together, in such a manner that binocular vision is possible.

Caimans hunt at night, and have a keen sense of smell. Having detected suitable pray, caimans can snap their jaws with considerable force, they possesses the basin instinct to prove as an effective hunter. Moving quietly and remaining hidden for as long as possible before striking out.

They are "cold-blooded" and rely on their environment to provide their body warmth. In the morning they will come on the land, basking to gain the benefits of the sun rays. Then, as midday approaches and the sun become stronger, the reptiles will tend to retreat back into the water, to prevent overheating.

In the Manu National Park are possible to find the White Caiman (Caiman crocodiles), the Black Caiman (Melanosuchus niger) and the Schneider's dwarf Caiman.

Turtles are old creatures in the evolutionary sense; the turtle's body is a curious anatomical arrangement that has impressively stood the test of time. In most of the Amazonia, turtles are now considered endangered specie. There are 7 species of them in Manu, which the most sighted, are the grooved side neck turtle and the Yellow headed side neck turtle.